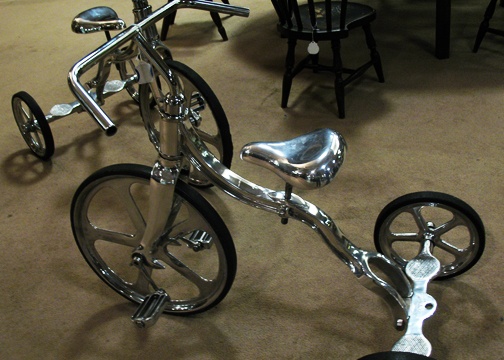 This one little photo from the Michael Jackson Neverland Ranch auction will always remind me of 2009. Fellow coworkers and I took the afternoon off to go see this auction at the Beverly Hills Hotel only to find our elation quickly tempered by plain old shock and sadness. We walked around the possessions he could no longer afford to keep and saw what was basically a pile of pop cultural detritus that represented one man's lack of emotional stability - he really and truly thought of himself as a child. When he passed away soon thereafter, we felt strangely privileged to have seen his junk. But it was just junk. And people were crying in the streets for a man who was no saint, who had let his compulsions raise away from him. He threw his talent out the window, where he also nearly dropped little Blanket. This memory of 2009 has nothing to do with my own sadness - I lost my full time job this year too - but MJ's depressing little tricycle will stick with me for a long time.